What is an Inframe Kitchen? 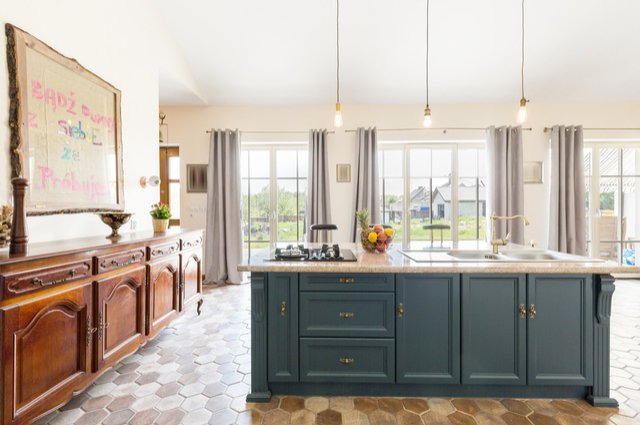 An example of an inframe kitchen. Image by Photographee.EU (via Shutterstock).

The cabinet door sits within a frame rather than on top of the frame. For many years, such kitchens have been on the expensive side. Today, they compare well with non in-frame equivalents in the price league.

We at A.D. Woodcraft would rather give you a proper inframe kitchen instead of a pale imitation of one. Whether your kitchen is poky or spacious, we enjoy the challenge of designing one that fits around your surroundings and needs.

Inframe, In-frame, or In Frame?

In the context of kitchen design, the correct spelling is ‘inframe’. Sometimes, in-frame may be used, to denote a singular part of the kitchen as in ‘in-frame door’ rather than ‘inframe door’.

Before the likes of MFI, Queensway, and B&Q sold fitted kitchens (before the 1970s or thereabouts), most kitchens were constructed using the in-frame method. Unlike frameless kitchen units, an inframe kitchen can last for several years. Decades or centuries even. Secondly, solid wood instead of plywood or chipboard is used in their manufacture.

As they say about anything that is ‘cheap and cheerful’, the latter might not apply. You might need to buy twice, so the cheap kitchen, bookcase, cupboard or wardrobe could have a short shelf life. This is why you are best going for a bespoke kitchen, like one of Austin’s designs, based around your needs.

Home » News » What is an Inframe Kitchen?

AD Woodcraft are specialist carpenters in Dublin who provide bespoke kitchens, wardrobes, radiator cabinets and alcove furniture including built in TV cabinets for living rooms. All custom designs are made to measure and carried out by our master carpenters/joiners.

At AD Woodcraft we can also provide a french polishing service and can cater for the commercial sector which includes a wide range of property maintenance work carried out by trusted and reliable tradesmen who have many years experience in the industry.