9th May 2018 by adwood in category Bookcases tagged as alcove, bookcases, design, furniture, shelves with 0 and 30

A bookcase is one of the most decorative ways of storing books, media equipment as well as art objects. Custom bookcases are timeless considering that they can fit into any space, and they can also be modified into any design that meets your needs. 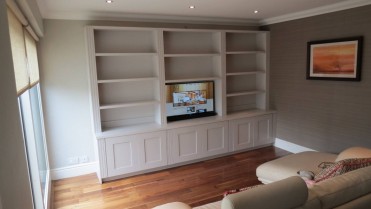 Custom bookcases in Ireland come in many variants; in-built, closed back or open back. Most of the designs available can be traced back to the Mid-Centuries. It is thus quite possible to find a design that fits your style and space. Making a suitable choice calls for one to narrow down on the best designs. The best ones are those that add charm to the interior and aesthetic value to some space.

Here are some tips on the available bookcase designs in Ireland;

Libraries look almost the same throughout the world. The same idea may be used to create a custom made bookcase in a house. A library design is suitable for those people who own a lot of books.

The bookcase may be inbuilt in a hallway and completed by a rolling ladder. The best thing about this design is that it can easily fit into various spaces including farmhouses. A library design is a definite addition to the easiest custom made bookcases in Ireland. The high shelves even fit into Victorian roofs and other places with extreme heights.

Various items can dot the many shelves which may also be adjustable for a heftier appearance.

The idea of placing bookcases all around a sitting or relaxing area has never lost taste. With the sofa snugly placed between bookcases, it becomes easy for one to reach out for a suitable collection.

Alcoves are formed when bookcases are placed all around a relaxing area. The idea is to create a cozy feeling as well as a feeling of continuity as the shelves are crown moulded. The shipshape feel in such a room allows for one to spend sufficient time digging for knowledge buried in various books.

Alcove designs give one an opportunity to add strategically placed lightings and other decorations.

Based on the designs of houses in Ireland, it is possible to find recesses off back doors or in outdoor patios. Sometimes, the recesses exist in storage walls in kitchenettes or potting areas. The area can easily be transformed into a custom made bookcase.

It is possible to create an in-built shelf in such areas. The best thing about them is that the bookcase will never interfere with the flow of traffic. Plywood shelves can easily be installed in the walls. Crown moulding connects the shelves giving them a feeling of continuity. It is also possible to paint the shelves giving them a warm feeling that acts to attract young readers.

Even if a room is extremely small, it is still possible to create an airy design. A minimalist approach may be employed to fit into the small space. Shelves are installed into the headboard of a canopy bed and in the backdrop.

Such custom bookcases in Ireland are commonly found in small rooms such as refurbished attics or guestrooms.