The History of Woodworking 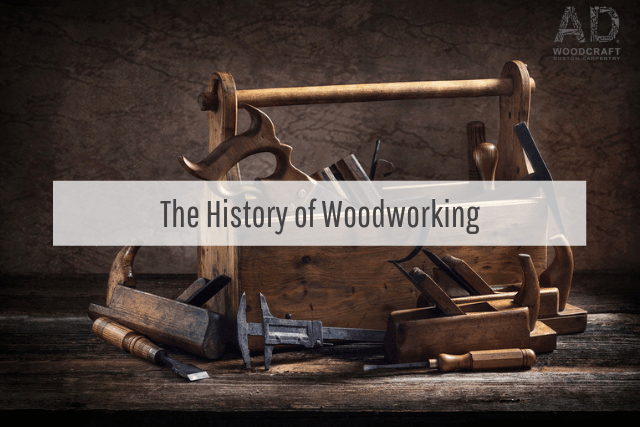 Whether referring to fitted wardrobes, bespoke chair rails or crown moulding the presence of woodworking can be felt throughout our everyday lives. Skilled artisans have developed talents which require years and even decades to complete and yet, even the most seasoned professionals might not be aware of the intriguing history that surrounds this craft.

Let us, therefore, take a quick look at how woodworking has evolved over the years in order to appreciate just how far this trade has come since its rather ancient roots. You might very well be surprised at what is in store.

A Rich and Diverse History

While the basic concept of woodworking is likely as old as mankind, the first concrete evidence of this craft emerged as far back as during the early Egyptian empire. In fact, the coffin of an ancient king known as Semekhet can be traced back to more than 5,000 years BCE.

This clearly illustrates that individuals with a talent for carpentry were highly praised during these times. It should also be pointed out that royalty from the Greek and Roman times were also known to be buried with highly intricate accessories; many of these containing complicated inlays of bone and ivory.

It is even thought that the Egyptians were the first to develop a process that would be known today as varnishing.

From Ancient History Into Modern Times

It would not be long before these skills spread to other portions of the world such as Europe. In fact, many common carpentry tools today are actually quite similar to those found thousands of years ago. Examples include the chisel, the mallet, the saw, and the adze.

Over time, woodworkers began to form an early form of trade union; enabling them to pass on exacting skills from master to apprentice. This is one of the reasons why many exquisite works of art can still be seen today within cathedrals, government buildings and museums.

The next time you casually wooden radiator covers or baseboard moulding, never forget that the skills required to fashion such objects represent a truly ancient art form.

Home » News » The History of Woodworking